A CHESTER-LE-STREET councillor is stepping up to support residents by sharing a range of walks that they can enjoy on their doorstep.

Labour Group councillor, Tracie Smith, who represents Chester-le-Street North, has launched Great Walks on the Doorstep, where she is sharing inspiration for those who are exploring their area more during their lockdown-exercise on her social media page.

Councillor Smith has shared a number of walking routes across her patch, to encourage residents to see and explore places they may not have seen before.  Tracie said she is keen to use her knowledge of the local area to inform residents who may not have had the chance to see what’s on their doorstep, some of the great places the area has to offer. 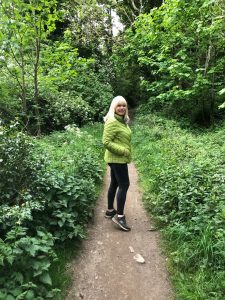 She said: “Though, for some, the lockdown has led to isolation, for others it has encouraged them to spend more quality time with their family, taking exercise together and connecting with their area in a way they might not have done previously.

“We are hearing so many positive examples of how the time spent together is bringing families closer, creating a sense of ownership of their local area and of course, the walks and exercise are also having a beneficial effect on physical and mental wellbeing, which is vital at this time.”

Tracie is keen to see people staying close to home – following the relaxation of lockdown – and visiting the great places on the doorstep.

She said: “As someone who knows the area like the back of my hand, I want to share that knowledge with residents, and support them to discover what is just outside of their door.  That’s where the idea for Great Walks on the Doorstep came from, so I started posting on social media, and the reaction has been brilliant.”

Cllr Smith has received scores of messages directly from residents who have been inspired to get out and follow routes close to home.  She is inviting residents to share their favourite walks with her, and she will post them on her page to get more people moving on her patch.

“It’s been a tough time and we know that many residents have reported feeling their mental health has suffered as a result of lockdown, so if this encourages more people to get out, take some light exercise and connect with their community in a way they haven’t done before, then that would be a really positive thing to come out of a challenging time for everyone.

As well as launching her Great Walks on the Doorstep, Cllr Smith has been supporting vulnerable residents with help from Morrisons in Chester-le-Street.  Her local store has been donating food that is given to residents who are vulnerable because of health issues and unable to get to the shops, and Tracie is making deliveries of the food directly to them at home, including a 104-year old resident who lives alone.  She has also been working in partnership with Major Liz Hancock of Chester-le-Street Salvation Army to make up food parcels, and has delivered them to the elderly in her ward who are isolating and have been struggling to get groceries.