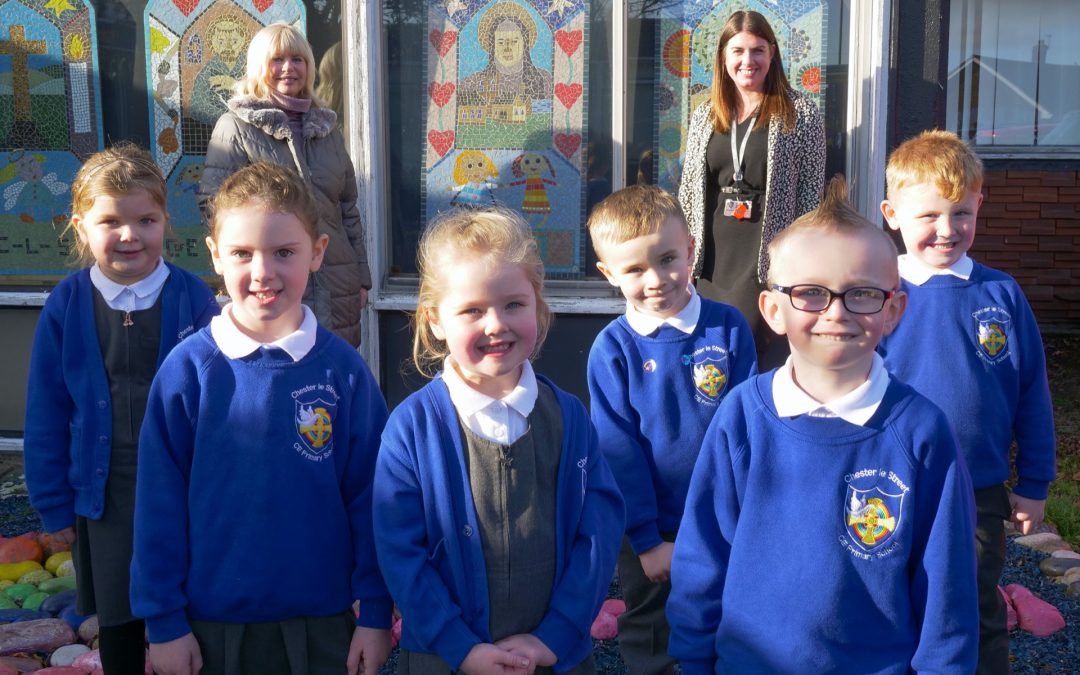 A group of primary pupils are using art to explore the footsteps of saints along the “Crossroads of Christianity”.

Children at Chester-le-Street Church of England School have drawn inspiration from the Northern Saints Trail, to create a series of stunning mosaic wall murals, which are on display at the school.

The project was the brainchild of County Durham Labour ward councillor, Tracie Smith, who utilised some of her Neighbourhood Budget to recruit community artist Susan Warlock, to come into the school and work with pupils on the eye-catching art.

Cllr Smith is a keen walker and has been an advocate of the introduction of the Northern Saints Trail, a series of historical walks based on ancient pilgrim routes, that positioned the North East as the ‘Christian Crossroads of the British Isles’.

Cllr Smith said: “It was fantastic to see how these pupils were inspired by the region’s rich history and the area’s role in the birth of Christianity in Great Britain. They put their hearts and souls into the artwork and it certainly brightens up these cold autumnal days.

“Myself and Labour council colleagues really pushed for the creation of The Northern Saints Trail, to bring walkers and other visitors to the county, inspired by walking in the footsteps of our forefathers. The Trail is made up of a number of “Ways” that take in some of the most beautiful parts of the region and our county.

“The children clearly loved stepping back in time and imagining their own walks alongside these Christian pilgrims, and we hope that while people look for things to do with their time during the restrictions placed on us by the pandemic, they will consider walking some of the Trails and discovering a bit more about our history and heritage.”

Chester-le-Street C of E headteacher, Rachel Butler, was delighted with the children’s efforts. She said: “It was really fun to watch the pupils’ excitement about the history that took place on their doorsteps and then use that in a colourful and creative way.

“The display in the school is really beautiful and we are all looking forward to a time when restrictions are not needed any longer and we can actually get out as classes and explore some of the Northern Saints Trails ourselves.”

The School Leadership Team said, “We loved designing the mosaics and we are really proud of how beautiful they look at our School.”

For information on the Northern Saints Trail, visit: www.thisisdurham.com/northernsaints