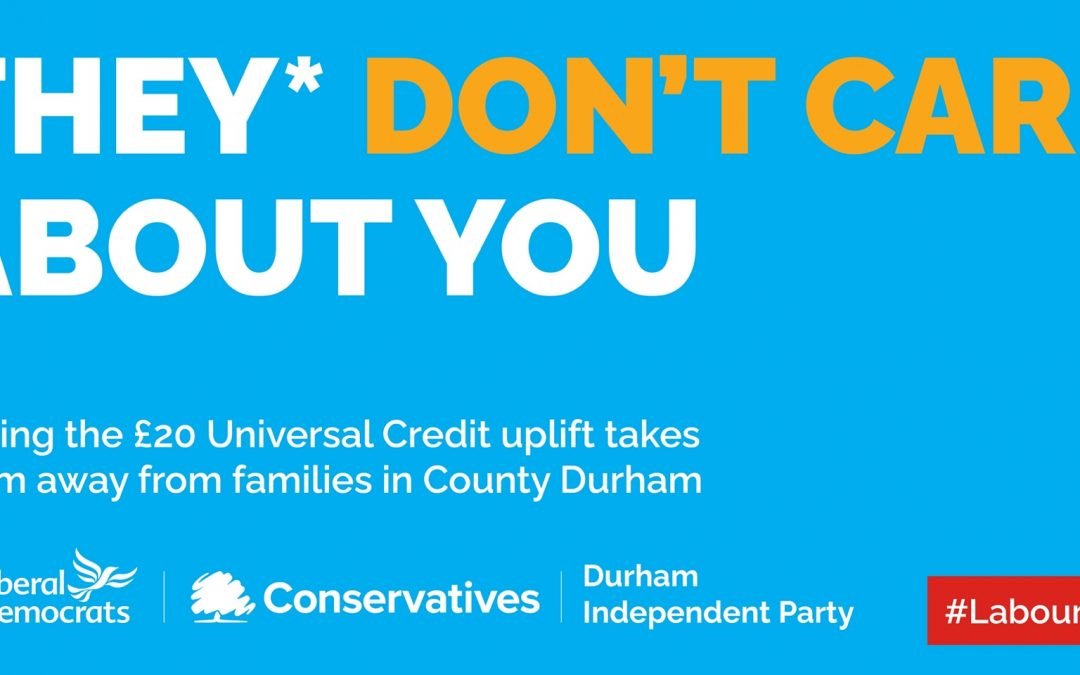 Labour councillors were dismayed when the Tory-led Coalition, propped up by the Lib Dems and Durham Independents, rejected a motion to condemn the “decision by the Government to remove the Universal Credit £20 uplift”.

Labour communities and inclusion lead, Cllr Angela Surtees, said: “Is this Conservative-led council actively working against the people of County Durham? Why else would it oppose such a clear and important motion – simply to let it be known to Government that the removal of this uplift will be severely detrimental to a huge number of North East families.

“Prior to the installation of the Tory-led Coalition, Labour was working to mitigate the impact of 10 years of austerity and welfare reform on people in the county. The £20 uplift isn’t a cure all, but goes a long way to support Durham’s 30,000 people in receipt of UC, most of whom are in work. It is also worth around £55m to the county’s economy.

“This Tory Coalition rejected opportunities to make the case for Durham to Government – it claims there is no social care crisis, refuses to oppose National Insurance hikes and now won’t condemn one of the cruellest, most inhumane decisions of this cruel and inhumane Government, which, if we take comments by the Durham Conservative deputy leader literally, isn’t listening to us anyway.

“The chaos we’re enduring from Parliament is being replicated here, as councillors focus on party politics over those who voted for them. We’re not out of the pandemic and people are struggling. Energy prices are rocketing, supermarket shelves are empty and we’ve had the largest tax hike in generations…the additional £20 meant some didn’t have to choose between eating or heating, but this Government doesn’t care, this Tory Coalition doesn’t care and the Lib Dems and Independents propping them up don’t care either.”

Full Council voted to water down the motion, saying it disagreed, questioned and challenged the decision, but refused to criticise the move. It stated that it would work with partners to minimise impact of the Government decision to take back the additional £20 a week rise.