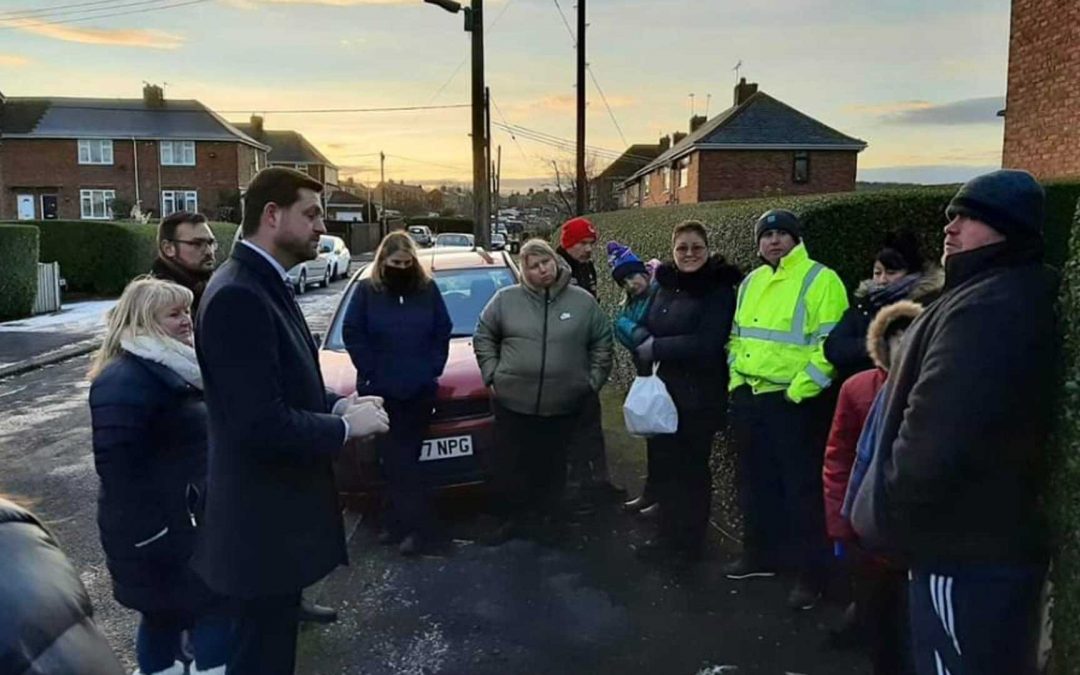 The newly appointed Shadow DEFRA Secretary visited storm-ravaged communities in the North East today (2 Dec), as part of one of his first official visits in his new role.

Jim McMahon MP joined residents, local councillors and business owners in the rural County Durham village of High Handenhold to hear first-hand how cut-off areas of the North have been impacted by Storm Arwen.

Thousands of people have been left with no electricity and heating as a result of the freak storms last week, with hundreds of residents – many of the elderly and vulnerable – still without power and left struggling to make ends meet.

The MP for Oldham praised the ‘resilient spirit’ of residents during the visit and reserved special thanks for the emergency services and local councillors who ‘truly went above and beyond to support their communities’ during the crisis.

Speaking during his visit, McMahon said:

“Thousands have been left without power for days on end, especially in rural and more remote communities, yet they been mostly abandoned by the government.

“Half-hearted reassurance from ministers hundreds of miles away is completely useless when so many people are unable to cook, charge their phones or store vital medicines properly.

“The Conservatives need to get their act together and ensure there is resilient infrastructure across the country to stand up to the more severe storms we know are coming in the climate crisis.

“But they are too busy defending their outrageous decision to hold Christmas parties when the rest of the country faced lockdown instead of stepping up for our Northern communities when they need it most.”

Local politicians Cllr Carl Marshall, Stanley ward councillor and leader of Durham Labour Group and Cllr Alison Batey, ward councillor for Pelton hosted the MP’s tour of the area and introduced him to the residents affected.

“Speaking to residents today, they have told us that they would like certainty and clarity about when they can expect to have their power back on. They have received nothing but broken promises and timescales for repairs that keep getting pushed back, leaving many of them left suffering in freezing conditions.

“We have also requested that Durham County Council instigates an independent inquiry into the council’s response to the storm.

“The leader of the council, Cllr Hopgood, has been missing in action, just like the prime minister, throughout this crisis and the people of County Durham deserve better.

“The residents and businesses of County Durham deserve to know how the response was handled from the start and also to be assured that everything was done to mitigate the impact of the storm in the most efficient and effective way possible.”

“Rural areas such as High Handenhold and Bearpark have been among the hardest hit in the UK by Storm Arwen, with thousands of residents left stranded with no electricity and power.

“Thankfully, the local emergency services, council officers and residents have been absolutely fantastic throughout, from clearing roads of debris and ice to providing support to those that have been left completely cut off from the outside world.

“Sadly however, it has also highlighted just how much Government cuts to infrastructure and public services continues to blight the forgotten communities of the North. With all of this talk of Levelling Up, it’s hard to see how they expect to take us seriously when they can’t even keep the lights on.”